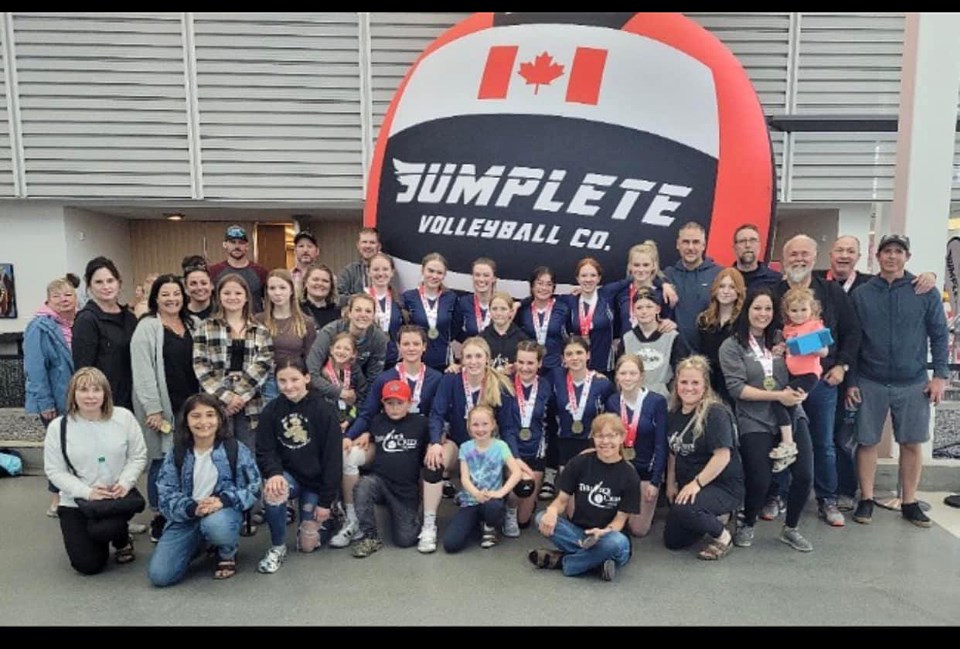 Sure, they’d had a successful season on the provincial circuit, eventually finishing 13th overall in the province at the Volleyball Sask club championships, but to put together similar success against some of the best in Canada during the May 20 weekend in Edmonton?

“I told the girls ‘we’re probably not going to win many matches out here, so don’t get too excited, but if you want to go, okay, let’s see what happens’,” said TCVC head coach Lorne Polupski. “So we went out there just to have some fun and a great experience, but then we just started winning.”

And winning. No matter how they were seeded, TCVC ended up advancing as one of the top seeds in their pool until they found themselves in the Division III Tier I championship round.

There, they defeated B.C.’s FVVC Blue 25-22, 25-22 in the quarter-final before finding themselves in another epic battle against Ontario’s Titans Olympus. A 25-22, 25-23 victory in that match and all of a sudden the team that wasn’t sure how much success they’d have suddenly found themselves playing for a gold medal.

“We fought from behind in every set we were in the first day, and again in the second day except for one match,” Polupski said. “Then it was elimination the last day and that first match was a heck of a battle, the second match was even tougher and we just worked our butts through it. As well as it all turned out I don’t think we played our best game until the last match.”

And what a match that would be.

It looked initially like the pressure of the moment had gotten to TCVC, as the Manitoba Predators — who had beaten Moose Jaw 26-24, 26-24 in the round robin — roared out to an 11-4 lead.

But then things turned around, and for a rather unique reason.

“During a timeout, Devlynn (McClung’s) dad and Jovie (Mohle’s) dad started chanting and getting the crowd going and our girls just lit up,” Polupski marvelled. “They caught fire, we had two really big hits right after, and there was more excitement than we had all weekend.”

TCVC roared all the way back, holding the Predators to only four points the rest of the way and eventually taking a 25-15 win in the set.

“They were hard, tough rallies with big hits and amazing blocks, too, nothing came easy,” Polupski said. “I had goosebumps to see the girls play that well.”

Things were far closer in the final set, though, but TCVC wasn’t leaving anything to chance — and with a 25-23 win, they were Volleyball Canada gold medalists.

“It was unreal, seriously unreal. It was one of the greatest experiences I’ve had as a coach,” said Polupski, who made a point of mentioning the work of fellow bench bosses Krysta Caplette, Haylee Bevan and Aly Bell as critical to the team’s success. “With the provincial win, too, it’s been an amazing year, and we have so many good players coming up through the ranks. There’s a really good future for Moose Jaw volleyball.”

Seeing teams not only have provincial success but now national-level success is something TCVC hopes is just a sign of things to come.

“We had girls from schools all over the community and it was super, super great for the kids,” Polupski said. “Moose Jaw volleyball has come a long way. You look at high school provincials the last few years, a Peacock provincial win, Vanier provincial win, it’s getting better and better and it’s just amazing to see how it’s come along.”

For more on the Thunder Creek Volleyball Club, be sure to visit their Facebook page at www.facebook.com/ThunderCreekVolleyballClub.